The village is of medieval origin, which, from the description in the Domesday Book, seems to have been of some importance at the time of the Norman Conquest. The village and parish lie in the foothills of Cranborne Chase, 4 miles north of Wimborne, known for the curiosity of being the only Dorset village with a Mediterranean-style fountain at its centre. Its presence is due to the determination of Henry Charles Burt, the owner of Witchampton Paper Mill, to have running water piped to the village. The supply was gravity-fed and the fountain acted as an overflow. Inaugurated by Miss World 1965, it has been restored several times, most recently in 2009.

Hinton means ‘Monk’s farm’ from Old English ‘hiwan’ and ‘tun’, due to links between the monastery at Wimborne and the parish. Martell is a manorial addition from a French family. Later the parish came to be known as Hinton Magna or Great Hinton to distinguish it from neighbouring Hinton Parva or Little Hinton. Hinton Martell is one of the many villages in England where the Ecclesiastical name differs from the local government name - the name of the church is spelt with only one “L”. This is due to the assiduous work of Rev. William Barnard who campaigned for the restoration of the medieval spelling of Martell (without the second ‘L’), to align it with that of the town in France, from whence the ancient Martel family hailed.

The ancient church of St John the Evangelist burnt down in 1868 and was re-built in 1870 by the architects J. Hicks and G. R. Crickmay, possibly with the help of their apprentice, the novelist Thomas Hardy. It is known that this church is one of the projects on which he worked. It is a stone edifice in the Early English style, consisting of chancel, nave, north transept, south porch and an embattled western tower containing 5 bells cast in 1870. 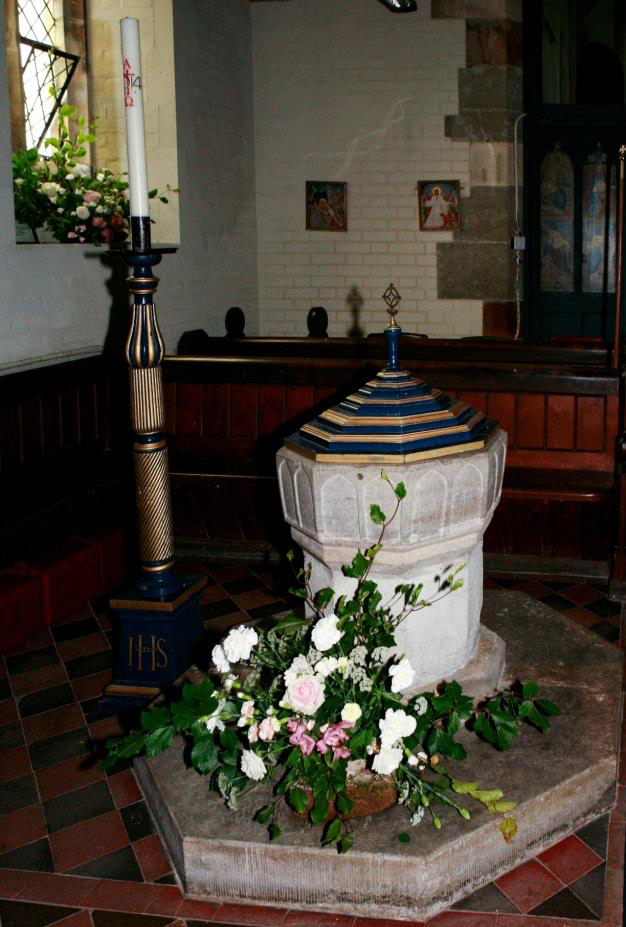 The oldest artefact is the 13th century Purbeck stone font, a crudely carved bowl with pointed arch recesses mounted on a pedestal. The magnificent 19th Century stained glass windows were incorporated, and it is altogether a beautiful and peaceful place of worship. In the past Hinton Martell had a high Anglo-Catholic tradition of worship, but today we only retain the pictures depicting the Stations of the Cross, several crucifixes, statues and reserved sacrament.

Next to the church is the Hinton Martel Village Hall. Originally the old schoolhouse, it was historically important as one of the few remaining rural Shaftesbury Schools. The National School, provided by the National Society for promoting the Education of the Poor in the Principles of the Established Church, was built in 1847. Now, as the Hinton Martel Village Hall, it is the venue for many arts and village events. The need for extensive repairs has provided the opportunity for substantial re-development in order to provide a much improved cultural centre for the village community.