About Witchampton Church and Village

A Brief History Of Witchampton

Witchampton was first recorded in the Domesday Book as Wichemtune, although other early spellings have been documented over time such as: Wichampton in 1216; Wychampton in 1263; and Wichelampton in 1271. It is thought that the village has origins tracing back to the Romans as evidence of a Roman vineyard has been discovered adjacent to the Church, along with Roman Villa near East Hemsworth. However, the breakdown of the name Witchampton has wic, haeme, and tun has Saxon associations. In Old english Wic and haeme, or ham, means Romano-British village, and tun or ton, means fenced area or enclosure.

The village of Witchampton and civil parish lies 5 miles north of Wimborne Minster and is situated within the Cranborne Chase Area of Outstanding Natural Beauty (AONB). The village was designated etc first National Conservation Area in Dorset. Witchampton lies on the east bank of the River Allen in the Vale of Allen. Most of the dwellings are situated between foot of a steep chalk escarpment and the edges of the water meadows. Pound Hill connects the main village with a few houses located on the top of the ridge on Crichel Lane. The land mainly comprises of farmland, forestry and woodland, and residential dwellings.

Until the middle of the 20th century the village was pre-dominantly belonged to the Crichel Estate which was most recently held by the Marten family, prior to that the estate was held by the Matraver family, the Earls of Arundel, the Cole family, and the Napier family before it came into the Sturt family. In 1765 the Humphrey Sturt re-modelled the house and extended the park by including the voyage of Moor Crichel and re-locating the villagers to Newtown half a mile out of Witchampton.

Historically agriculture was the primary occupation in the area, however two flour mills were located at Newtown since the Domesday survey of 1085 and continued in one form or another until 20th century. One of which was converted to a paper mill in the early 1700’s. The paper mill ceased to exist 2002 when a area was developed into residential housing.

According to Sir Frederick Treves in Highways and Byways in Dorset, published in 1906:

‘Witchampton is one of the most beautiful villages in the entire county. Placed in a wooded dip by the Allen River, it is like a garden in a dell. Many of its thatch-roofed cottages are almost hidden by roses, while there is hardly a wall of faded brick that is not covered by jasmine or honeysuckle. The village is everywhere ablaze with flowers. There are flowers in the churchyard, about the lych-gate, and around the low square tower; flowers growing alike on stable roofs and between the stone of the courtyards. There are the ancient manor house with its crown of gables, the little stream with its mill and its venerable stone bridge, and the water meadow with its ivy clad ruin of the Abbey Barn. This garden hamlet has remained unsullied by the world, and provides a dainty realisation of rural England in its ancient simplicity.’

In the 110 years since Sir Frederick Treves wrote his book the village of Witchampton maintains its unique beauty and special charm that is unparalleled elsewhere. 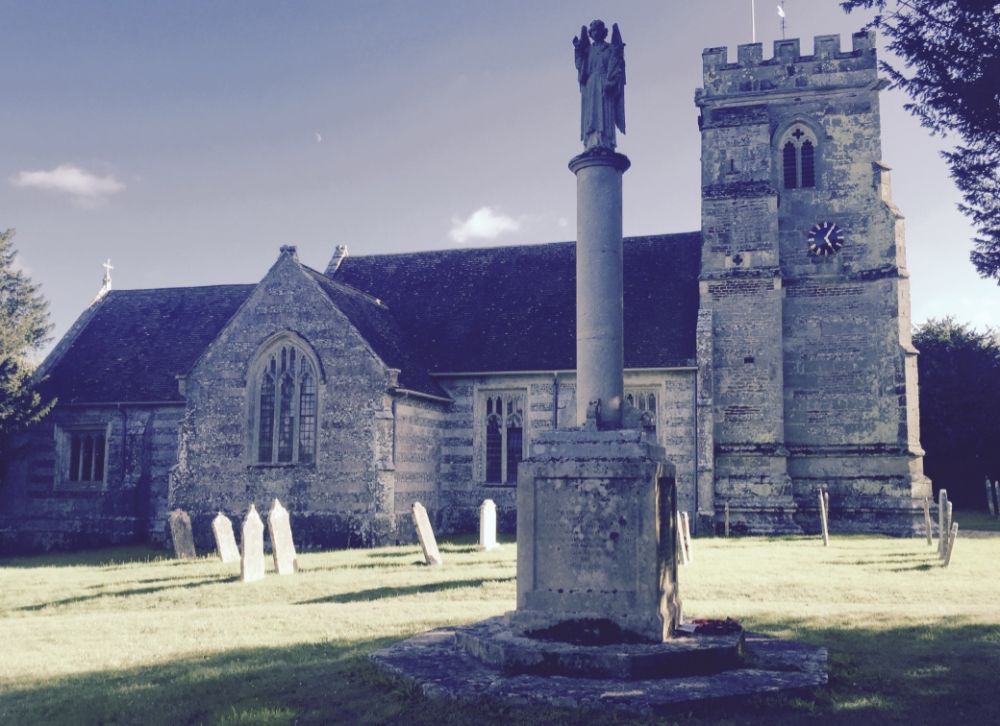 Witchampton’s Parish Church is dedicated to St Mary, St Cuthburga & All Saints. St Cuthburga was a Saxon Princess, dressed as an abbess holding a crosier in one hand and a model of Wimborne Minster, of which she is founder, in the other. Her statue stands over the beautiful Arts and Crafts style lychgate. St Cuthburga was the first abbess of Wimborne. Cuthburga was the daughter of Prince Conrad, a cousin to Caedwalla, King of Wessex, and a direct ancestor of Alfred the Great. She was extremely well connected in Saxon times and married to Aldfrith, King of Northumbria. Eventually Cuthburga and Aldfrith separated for religious reasons and Cuthburga took the veil with her sister St. Cwenburga. Her brother Ine, now the King of Wessex was so impressed that his sisters had devoted themselves to the service of God that he built a church for the good of his soul and for his people. He had a double monastery erected between AD 700 and 705 of which Cuthburga was its first abbess and his sister Cwenburga a nun. Cuthburga died in AD 725 on 31st August which became the feast day associated with her.

The Church is the only stone built building in the heart of the village, emphasising its important role as the focal point of the village. It is a Grade1 listed building. The main Church dates back to 1832 rebuilt after a fire, only the Tower is Saxon. 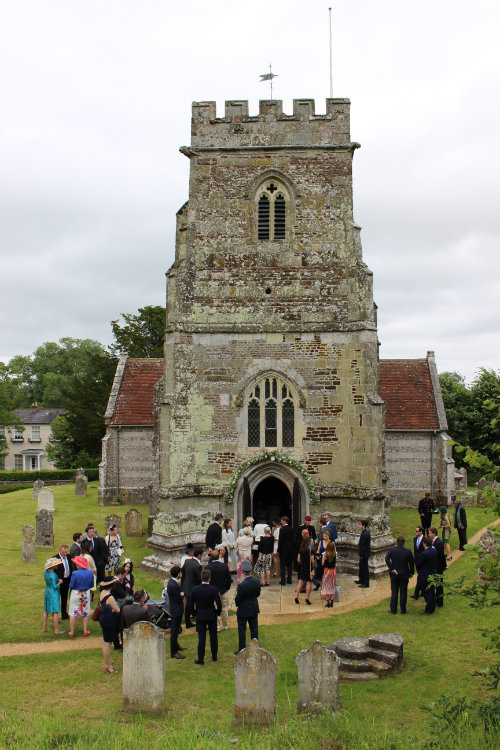 The original 15th century tower is built from ironstone and greensand banding. Only the tower survived a re-build in 1830’s, and boasts a gargoyle playing the bagpipes. The rest of the church was rebuilt between 1832 and 1844 in ashlar and flint banding by an unknown architect after a fire.

The Chancel, Nave and North Transept

The Chancel and Vestry

The Vestry and the organ chamber on the south side of the chancel were added in 1898. 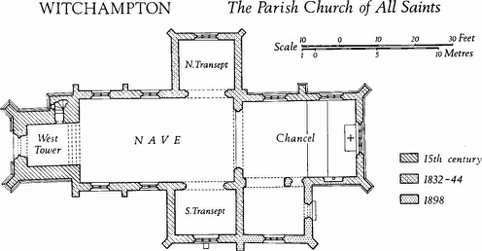 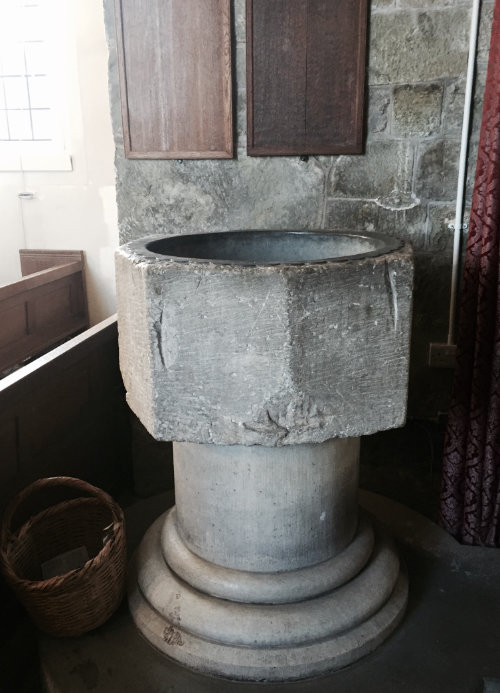 All that remains of the old church is the bowl of the 13th century font and the 15th century tower which has 4 gargoyles, including one playing bagpipes! The font was infamously discovered in a nearby field, having been used as a cattle trough and has since been rescued and restored.
The medieval font comprises of a plain stone bowl which is irregularly octagonal with circular lead-lined basin, the pedestal was added in 1898. 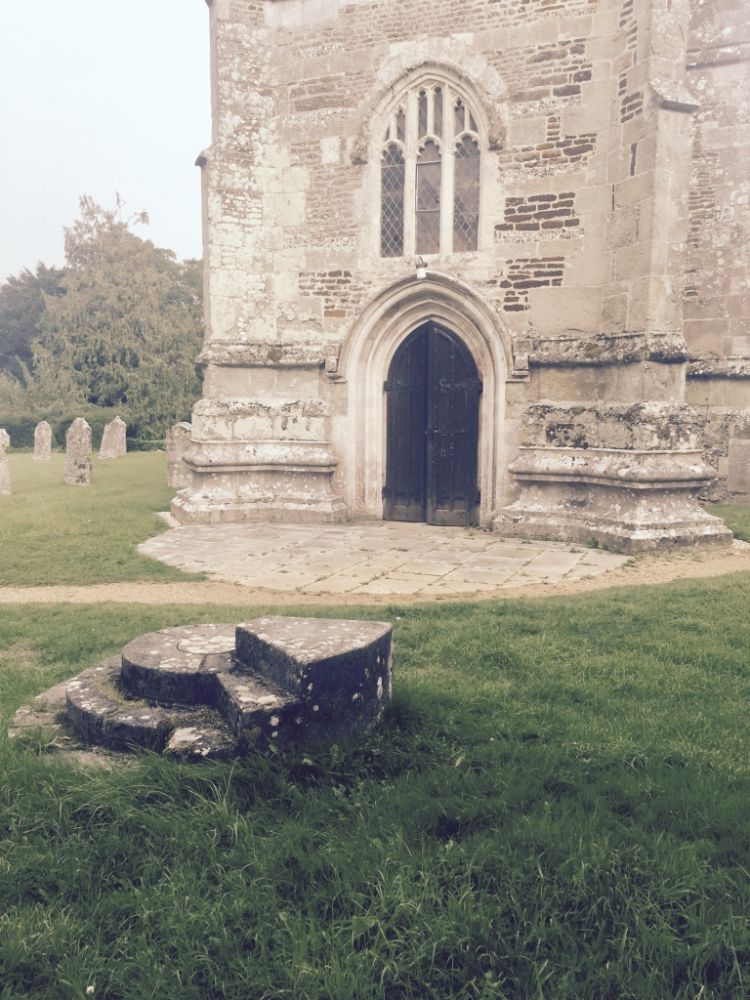 In the churchyard there is a circular mounting block, in the centre of which can be seen where the pillar topped by an Angel once stood. This pillar is now on top of the war memorial by the side of the church. 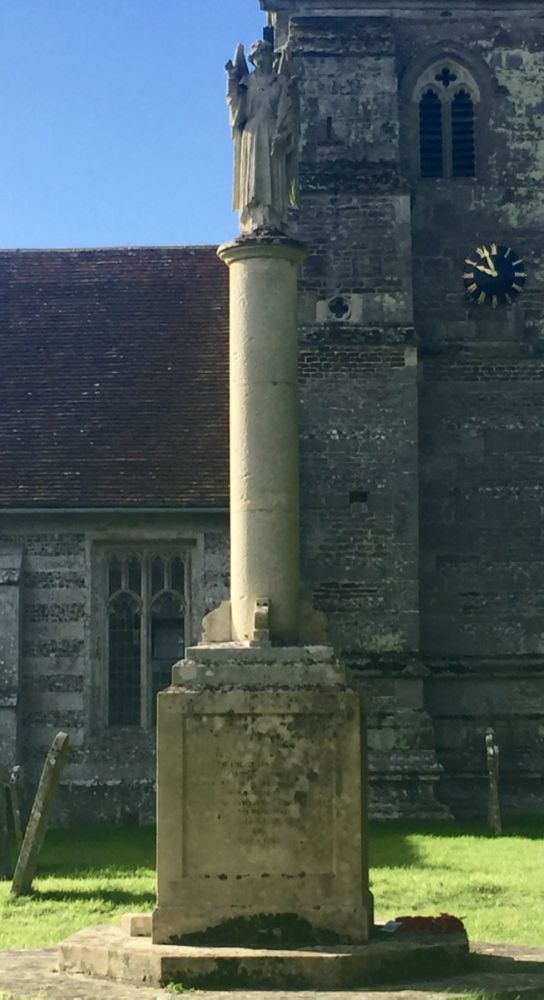 The memorial which is located in front of the the church is dedicated to the fallen soldiers from the Parish who served during WWI and WWII.

The bells have been heard in the village for well over 250 years and perhaps longer. In 1726, 5 bells were cast in a nearby field by Robert Wells of Aldbourne, Wiltshire. In 1935 a new treble bell was added and have been refurbished and retuned and are still rung regularly. 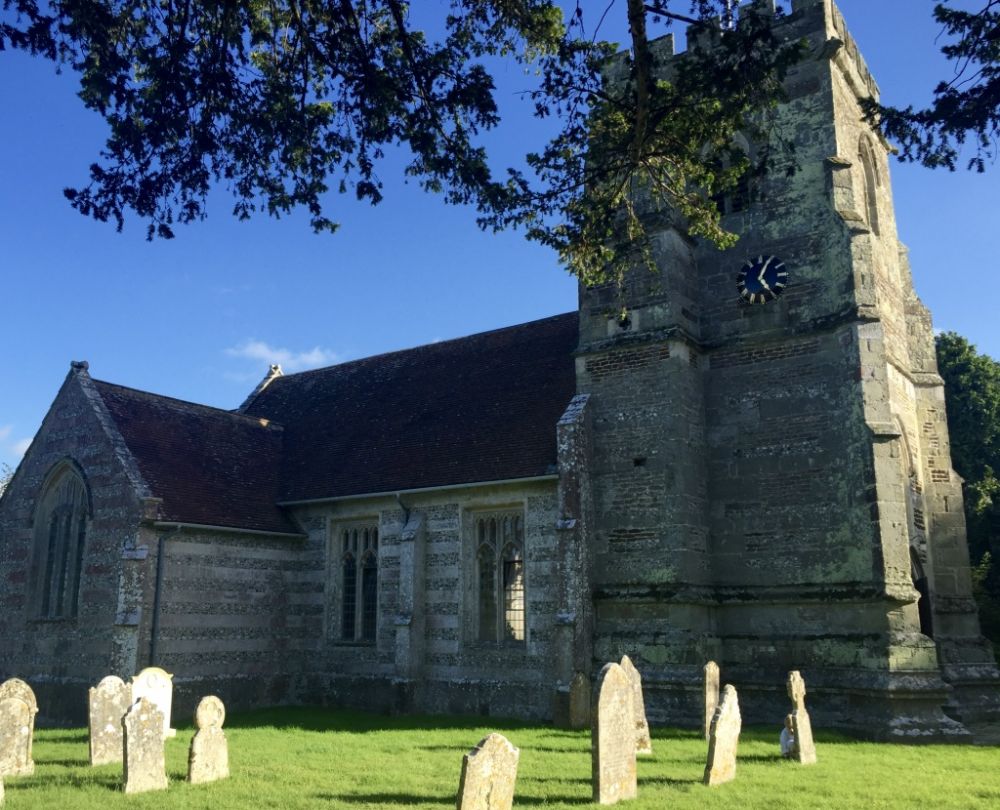 It is located on the West Tower and accessed by the belfry. It is made of wrought iron and made in 1737. It was recently refurbished in 2016 and has been restored to its former glory.

The polygonal pulpit is mid 18th century and has moulded panelled sides in two heights. 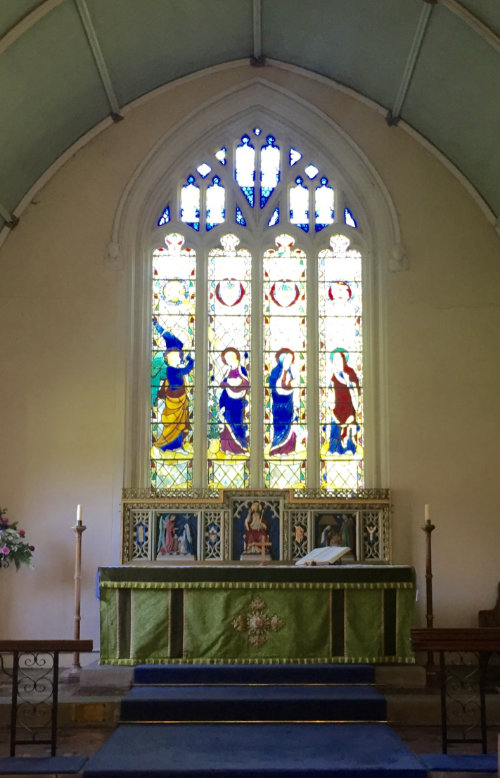 A very fine East window representing the Annunciation and Visitation is by Sir the Scottish born Architect Sir Ninian Comper. He was one of the last of the great gothic rival architects, noted for his churches and their furnishings, particularly for his stained glass windows and his use of colour
and his subtle integration of Classical and Gothic elements.

Church Services
(held in rotation with other churches in the area)

There is also a Methodist church in the village, built in 1890 on the site of a 19th century chapel. The chapel has its own burial ground. It is said that the Romans used the terraced ground on the western side of the church towards the chapel as vineyards. The chapel has its own hall used for a variety of local activities and where Little Owls Pre School can be found.