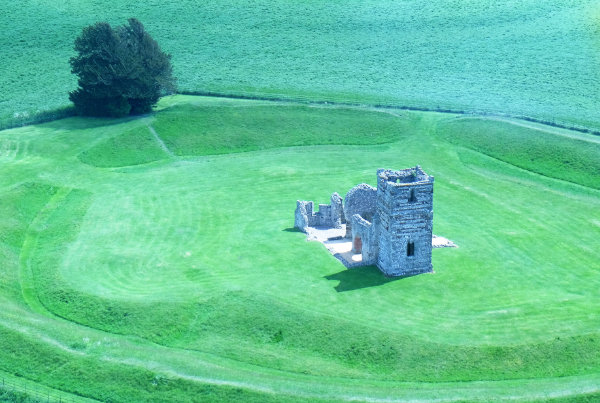 Two miles north of Horton lies the ruined church of Knowlton, standing within one of Wessex’s most substantial henge monuments.

The Church itself is a stone and flint Norman church dating from the 12th Century, with later 15th century additions. It used to serve a small hamlet, and was in use until the 17th century when the hamlet was largely abandoned.

The Neolithic henge monument in which it stands dates from about 2500BC, and would have been a ceremonial site, with the ditches and banks surrounding a massive circular timber construction of concentric rings of posts. The clump of trees to the east conceals the largest barrow in Dorset, and there are other earthworks nearby making it part of a substantial henge complex.

It is unknown as to why the church was built within the earthwork circle, but many early churches were built on former pagan sites of worship or ceremony. That the earthwork has survived so well is largely thanks to the strict regulation of land use within the Cranborne Chase, used as a hunting ground for most of the last two millennia.

Following his defeat at the battle of Sedgemoor in 1685 (the ‘Pitchfork Rebellion’), the Duke of Monmouth escaped in a small group and headed for Lymington in an attempt to flee the country. He was found hiding in a ditch, dressed as a peasant woman, at a place now marked by Monmouth’s Ash near Slough Lane in Horton Heath. He was betrayed to the pursuing soldiers by a local woman who pointed out where he was hiding, and as he was led away he cursed her with the words ‘May you die a lousy death’. Allegedly she did indeed die shortly afterwards, and the lane was named ‘Louse Lane’ as a result. Later this was corrupted to Slough Lane.

Much as the local golf club may wish to claim this name for itself, Remedy Oak is in fact an oak tree which grows – barely – by the side of the road where the road to Woodlands meets the Verwood to Cranborne road. Having been touched by King Edward VI, himself considered to have been anointed by God, it was believed to contain healing powers, and those suffering from Scrofula, a skin disease known as the ‘King’s Evil’, would be cured by touching the tree.

Built in the second quarter of the 18th century (1726??) on the instructions of and paid for by Sir Humphrey Sturt, a local landowner and Dorset MP, the Horton Tower is a folly which stands to the south of Horton. It consists of a seven storey tower of some 120 feet, and was originally surmounted by a cupola. Its purpose is uncertain, but most likely it was used to spot herds of deer in the Chase, and to enable Sturt to watch the hunt when he was too old to ride. There were originally floors on each level, but these collapsed and the tower rapidly reverted to use as a grain store. Nowadays it serves as a platform for Vodafone mobile telephone masts.

Looking down from the base of the Tower towards Horton village, the sharper-eyed will be able to discern the edge of the old lake. This artificial lake was created by Humphrey Sturt (jr) in 1750? by damming the stream which flows into Prior’s Copse, and covered some 240 acres. Not only did it provide a spectacular view from the Manor House his grandfather built in 1718 , but he used to farm fish, particularly carp, and sell them to the fishmongers of Salisbury and London. When Sturt inherited Crichel House via marriage in 1765, he moved away to the grander surroundings and both the Manor House and lake fell into disrepair. By 1770 no trace of the house remained, and the lake drained away over the following years because the head was not maintained.